What You Need to Know About Meetings and Meeting Culture.

Can you think of a single week at work when you didn’t have at least 10 meetings booked into your calendar?

We certainly can’t. And neither can most people. Time spent in meetings has increased by 10 percent every year since 2000.

We need meetings to stay organized, to collaborate with others, to complete group projects, to win new business, to keep customers informed and engaged, to report on performance and so much more. Or let us state it more clearly: businesses can’t operate and grow without meetings.

But phrases like ‘meeting madness,’ ‘meeting insanity,’ ‘waste of time’ and ‘productivity killer’ have been popping up everywhere. You know what we're talking about: those meetings that lack a clear direction, are poorly organized and include far too many people.

“Thinking that running an effective meeting is as simple as completing one task or using one tool is where many people go wrong. Rather, it requires a holistic approach – from considering factors, such as meeting size, duration, notice period and time, to implementing the right technology to optimize processes, save time and, ultimately, enable teams, colleagues and clients to work more collaboratively across the entire meeting lifecycle.” - Renato Profico, CEO, Doodle

Earlier this week, we launched our Q2 2020 State of Meetings report based on the analysis of meetings (business and personal) booked worldwide by more than 30 million users on Doodle during the second quarter of 2020. What we found is eye-opening and can help organizations make more strategic, data-driven choices about when and how to schedule meetings so they are as focused and productive as possible.

Here’s a preview of meeting stats from our Q2 2020 State of Meetings report.

For most professionals, one-hour meetings have typically been seen and used as the default meeting length. But as our platform data, this may not be the case anymore. In Q2 2020, the most popular meeting duration was 30 minutes (36 percent). One-hour meetings, on the other hand, were far less common (20 percent).

Our platform data also shows that 15 minutes (31 percent) was the second most common meeting length in Q2 2020. This could be attributed to the fact that stand-up meetings have become more popular in organizations today. This type of meeting typically occurs daily and requires participants to stand as a reminder to keep things concise. Teams often use stand-up meetings to quickly touch base, report on progress and call out important items that require attention. 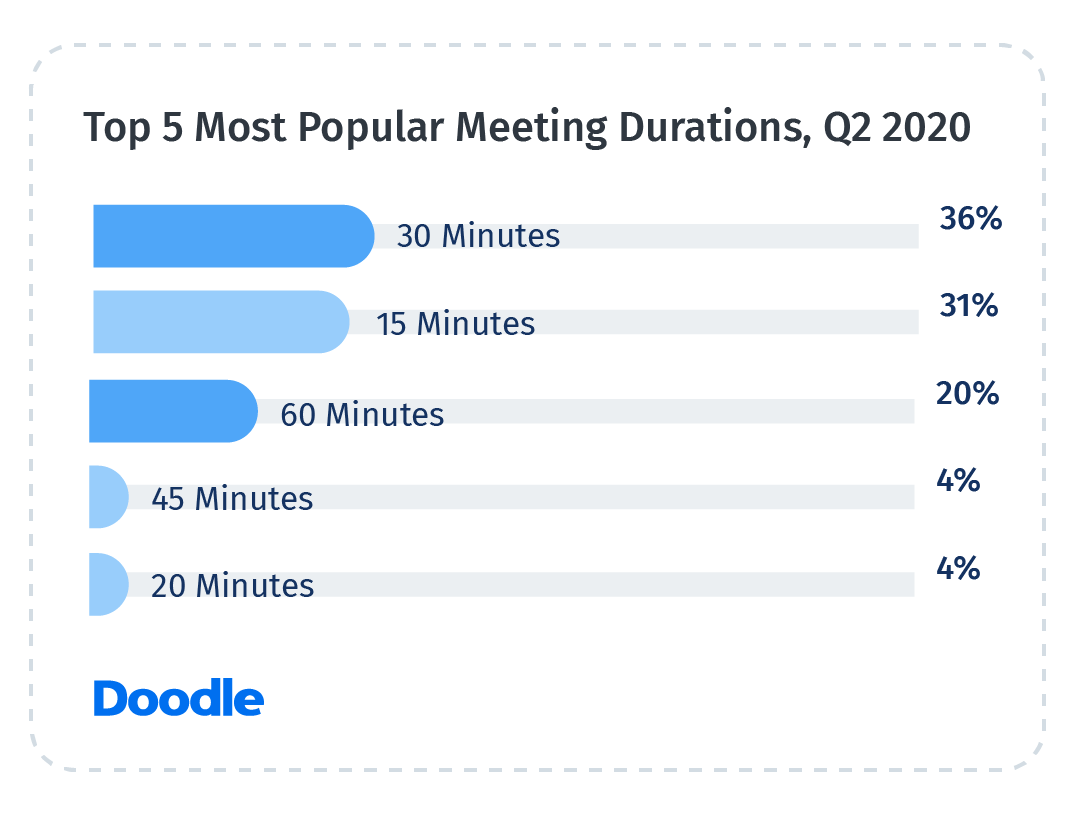 Another reason to hold a 15-minute meeting, especially during the current coronavirus pandemic, could be to check in on the emotional needs of employees. Keeping meetings limited to 15 minutes allows for the conversation to be more relaxed and minimizes the likelihood of wasting time in unproductive meetings (a common complaint voiced by meeting participants).

Our data suggests that employees aren’t blindly following traditional scheduling practices (i.e. setting the meeting duration to one hour as a default). Rather, they are questioning scheduling norms and readjusting their approach – all for the sake of gaining back control of their time, bringing greater efficiencies to their work lives and making more of an impact within their business.

As Google Co-Founder Larry Page once said: “Small groups of people can have a really huge impact.” In looking at our platform data for Q2 2020, we noticed a trend that falls in line with Larry Page’s philosophy when analyzing our own data. Nearly half (44 percent) of the group meetings were limited to four to seven people. Meanwhile, 24 percent of the group meetings were even smaller, with a total of four to five participants.

We believe meeting organizers should be selective and strategic when deciding whom to invite to meetings. Only those people who will actively contribute should be included in meetings. But oftentimes, we see organizers inviting a large number of people to meetings because they don’t want people to feel excluded from the process. But in reality, a good portion of group meeting participants end up being meeting fillers, don’t really play an active role in the process and don’t make an impact on the purpose/goals of the meeting.

Americans love meetings a little too much

When we looked at our platform data for Q2 2020, we noticed that there is no time in the workday when Americans are less likely to have meetings, except for 12:00 pm noon when there was a slight dip to 9 percent (from 10 percent at 11:00 am). But then the percentage of meetings jumps up to 13 percent just one hour later, at 1:00 pm. This shows a clear pattern: Americans are always meeting and always working.

If Americans are over-scheduling their workdays with too many meetings, this could directly impact their ability to get work done, cause delays in larger projects and affect their individual performance. As a result, they are likely to make up for ‘lost time’ by completing work outside of business hours. That leads them right back to being overworked, stressed and burned out. 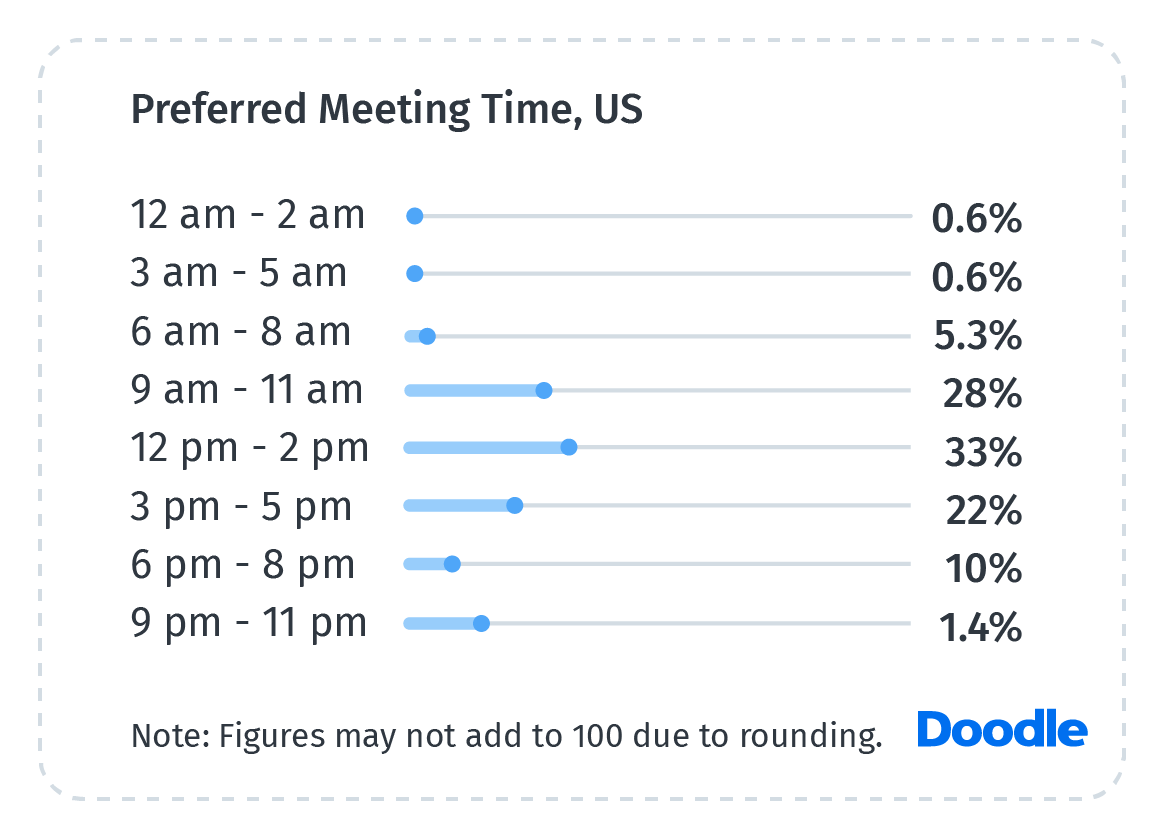 The United States, as a nation, has become synonymous with a culture of overworking. According to the ILO, Americans work 260 more hours per year than British workers and 499 more hours per year than French workers. And while at least 134 countries have laws in place to limit the number of working hours each week, the United States has no such laws.

According to a study by Accounttemps, 44 percent of American professionals are most productive in the early morning and 31 percent in the late morning. The study also indicated that employees should avoid scheduling meetings at noon, as just 2 percent of the respondents said they get the most work at lunchtime. However, our platform data reveals that Americans aren’t taking full advantage of their productivity ‘flow’ in the mornings. In particular, 33 percent of American meetings were booked between the morning hours of 7:00 am and 11:00 am. Remember, this is the same time period that the Accounttemps study found to be the most productive for American professionals.

The bulk of German meetings happen in the mid-late afternoon

In looking at our platform data, we noticed that over half (57 percent) of German meetings were scheduled in the mid-late afternoon, between 12:00 pm and 6:00 pm. One inference that can be made from this finding is that the mornings are regarded as a time for deep focus, attention to important projects and peak productivity. So, German professionals would rather slot meetings into the second half of their workday so they can spend the morning hours doing ‘deep’ work and getting organized for the rest of the day.

I was rather surprised to see that 15 percent of the German meetings booked in Q2 2020 took place on Saturdays and Sundays. In contrast, weekend meetings were less common in the US (7 percent), UK (8 percent), France (10 percent) and Switzerland (12 percent).

This tendency for being available for weekend meetings could come at a high cost. As a Gallup poll recently revealed, as many as 4.1 million German workers experienced work-related mental or emotional stress. In a Quartz article, the chief executive of Techniker Krankenkasse, one of Germany’s leading public health insurance providers, also confirmed that ‘lifestyle diseases’ are on the rise in Germany, citing the fact that TK customers miss more than 15 days of work a year, on average.

Morning meetings have no place in British calendars

According to our platform data, the mid-afternoon hours are a prime meeting time in the UK. In particular, 24 percent of the meetings occurred post-lunch, between 2:00 pm and 4:00 pm. When we looked at the hour of the day when the most meetings took place, 2:00 pm came out in the top spot (9 percent) above all other times in the day. This could be due to the fact that, after eating lunch, British professionals get a surge of energy and motivation. And so, they may be more inclined to capitalize on that renewed energy to attend meetings and lend their help, insights and value to the projects being discussed. 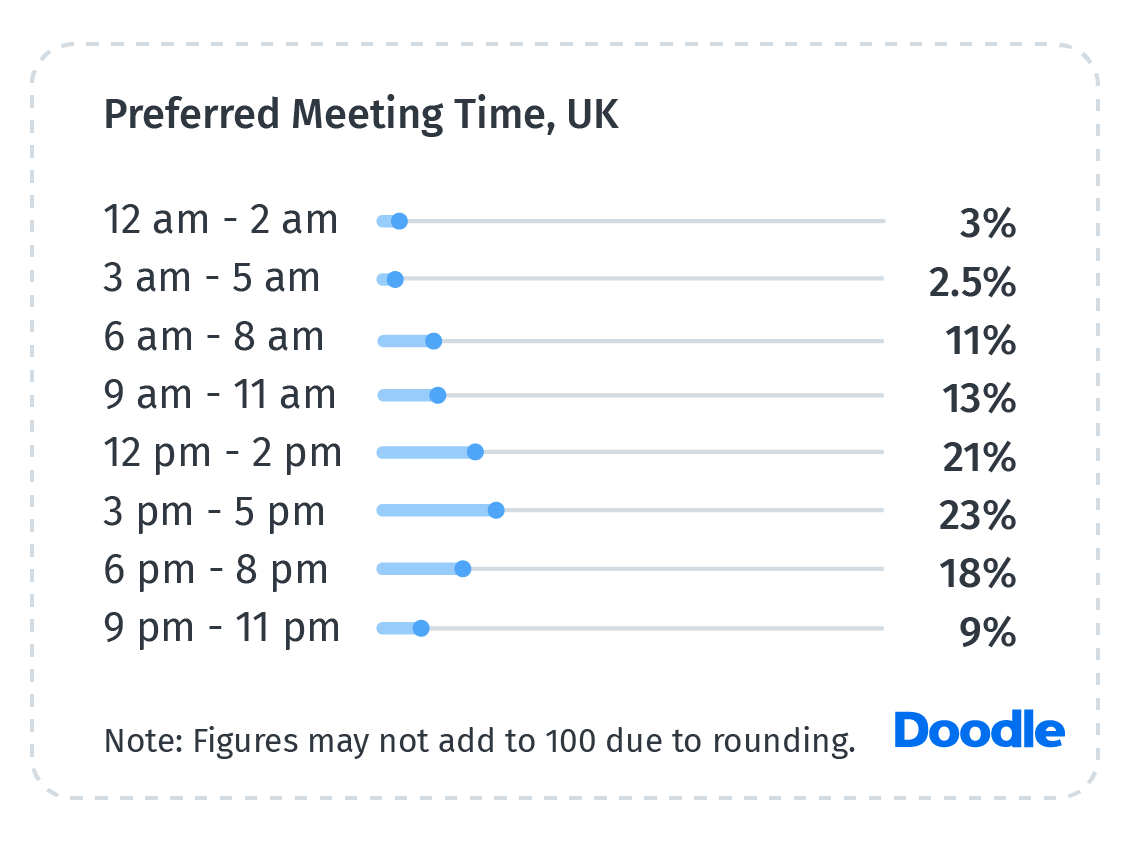 Similar to their American counterparts, British workers prefer to slot the majority of their meetings into the middle of the week, leaving more time on Mondays to concentrate and complete important tasks. So, what days in British calendars are more likely to be filled with meetings? Based on our platform data, the answer is both Wednesdays (20 percent) and Thursdays (20 percent).

It’s also interesting to see that weekend meetings are highly unusual for the British, with only 5 percent taking place on Saturdays and 3 percent on Sundays. The British are, for the most part, protective about their personal time and are highly unlikely to organize or participate in meetings that cut into their weekends.

To get more meeting stats, download the Q2 2020 State of Meetings report.